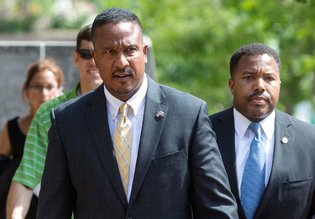 Hours after learning that the United States ambassador to Libya and three others had been killed in Benghazi, Libya, on Sept. 11, 2012, senior American officials held a secure videoconference call to discuss how to proceed in investigating the attack.

The prosecutor on the call for the Justice Department was Zainab N. Ahmad, one of the department’s most respected national security lawyers. In less than a decade in the United States attorney’s office in Brooklyn, Ms. Ahmad had successfully overseen several high-profile prosecutions, working alongside the New York-based F.B.I. agents who were going to take the lead in investigating Benghazi.

But then others started to lobby Eric Holder to give them the case. And guess what?

Less than 24 hours after the attack in Libya — and 21 months before the apprehension of a suspect, Ahmed Abu Khattala — Mr. Holder assigned the case to Mr. Machen’s office. The move was a surprise because nearly all major national security cases since the Sept. 11, 2001, terror attacks had been steered to the United States attorneys’ offices in New York and Brooklyn, which have the most seasoned prosecutors in the country, and Northern Virginia, which is known for its government-leaning judges and jury pools.

In one sense, the jockeying was a reflection of the intense competition among prosecutors for any high-profile case that could help make a career, a competition that is fostered by Mr. Holder and his deputies in Washington who believe it sharpens even the most seasoned lawyers.

Mr. MacBride, who was the United States attorney in Northern Virginia at the time of the 9/11 attacks, said “hard-fought turf battles” for terrorism cases were not unusual.

“We all lost some cases to each other,” he said. “At the end of the day, we all liked and respected each other.”

But in this case, the decision to give the case to Mr. Machen’s office has left lingering concerns among some senior F.B.I. and Justice Department officials who worry that it was a mistake to entrust such a politically charged prosecution to an office with less experience than others in trying terrorists.

On Monday, Mr. Khattala, who will most likely go on trial this year or in early 2015, will make his first court appearance since his arraignment in June, and those doubts have not dissipated.

“This is not how it should have been done,” said one law enforcement official, who like others critical of the decision spoke on the condition of anonymity.

Another senior law enforcement official had a more specific concern.

“It took them nine months to charge this guy — far longer than it should have,” he said. “Initially, they just didn’t know what they were doing.”